“The “ADAMAS AWARD” is a special award given to businesses who lead the way with their exemplary business culture. The award recognizes the service provided by employees and management working together and the resultant success of the business as a whole. The decision on who wins the award is based on an assessment of a 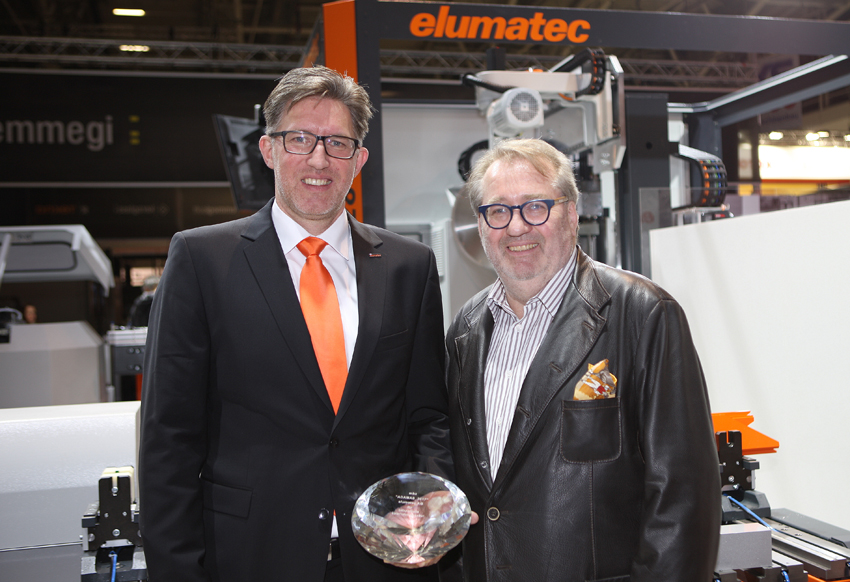 Ralf Haspel, CEO of elumatec AG, together with mbz Editor-in-Chief Karl Ruhnke-Lierenfeld with the ADAMAS AWARD 2017. Photo courtesy of elumatec.

business’s “soft skills”, such as the ability of employees and management to work in a team and their motivation.

The “ADAMAS AWARD” does not reward specific high achievement. Instead, it recognizes a business and all its employees as a community of service providers, which involves paying particular attention to the management team responsible for the business. In his speech, Editor-in-Chief Karl Ruhnke-Lierenfeld explained the reasons behind the decision to give the award to elumatec AG.

The rumors spread. A staff meeting had been called for the afternoon. You could have cut the atmosphere in the packed hall in Mühlacker-Lomersheim with a knife as over 400 employees waited for the latest news. On 26 July 2013 it became official: elumatec, the Swabian family business founded in 1928, had filed for insolvency that morning. No-one among the workforce knew what would happen next. The administrator did not attempt to hide the seriousness of the situation, but he also gave the elumatec employees reason to be optimistic. 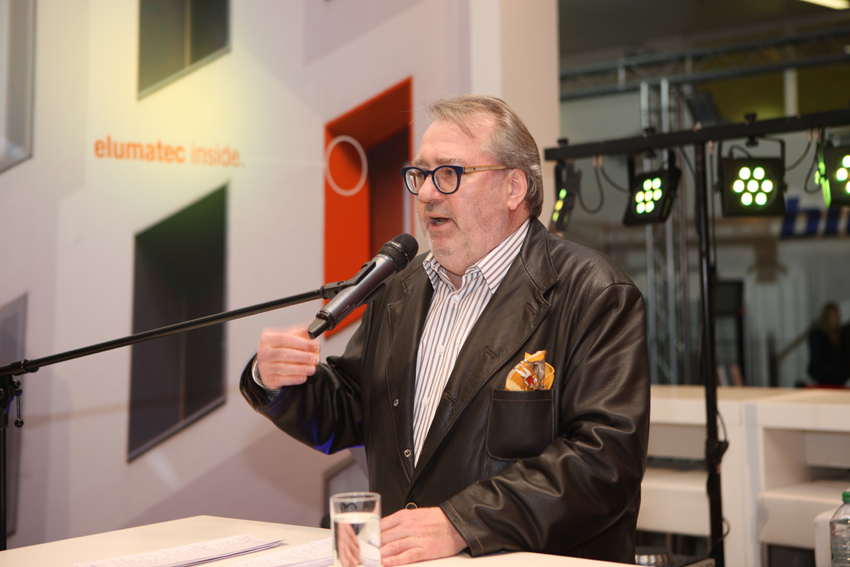 He had every confidence that a sustainable, long-term solution could be found for the employees at Mühlacker and for the elumatec group. His confidence was based on the fact that the core elumatec business was not one of the reasons for going into insolvency. The first step was to focus all activities on convincing customers and suppliers that elumatec remained a reliable partner who would continue to fulfill all orders to the letter and with the same high quality. The management team, workers’ union and employees were united in their efforts to justify the administrator’s confidence. And he was proven right: Two months later he and the elumatec management team announced at another staff meeting that the restructuring of the business was progressing well – so well that backlog of orders had actually increased after filing for insolvency and that elumatec was once again able to finance all its domestic and international business activities from its own pocket. Furthermore, all working relationships remained unchanged for the time being. The local press headline ran: “450 employees breathe a sigh of relief”.

More good news was soon to follow, as even before insolvency proceedings were officially opened on 1 October 2013 elumatec began the process of hiring staff for new roles and apprentices in various sectors of the business. As of October, elumatec was once again able to pay all wages and salaries out of its own pocket. It should not be forgotten at this point that the loss of around 50 jobs in the course of the insolvency eventually proved inevitable. Beginning on 1 January 2014, the employees affected received further training at a transfer company, for which a period of up to twelve months per person was planned in accordance with the maximum time limit allowed. I think this speaks volumes for the sense of responsibility that elumatec feels towards its employees! 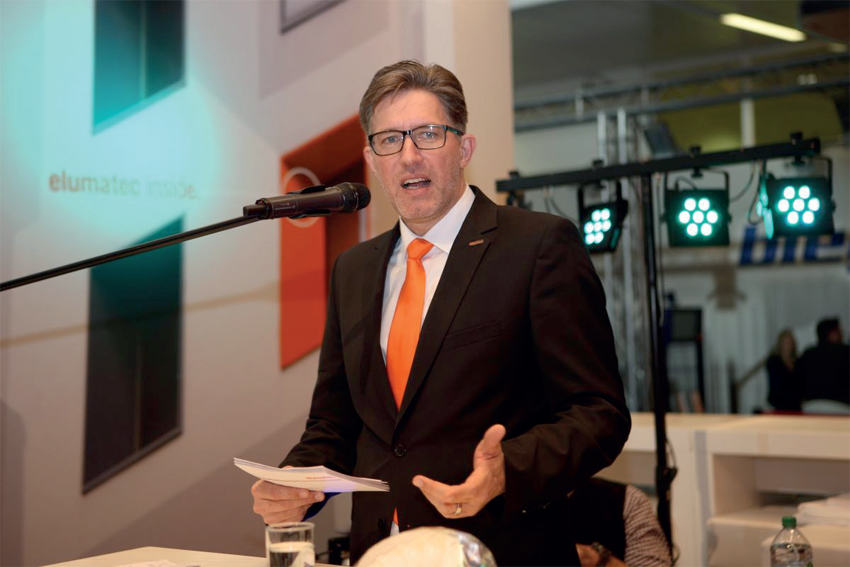 were held to keep staff up to speed on all the important developments affecting their business as soon as they occurred. Task forces for individual issues were created, and the circa 300 elumatec employees abroad were kept in the loop via email newsletters and invitations to visit company headquarters. Once the insolvency was over, elumatec went to great efforts to professionalize its public image, revive the brand and introduce a new corporate design. The first official appearance, at the FENSTERBAU FRONTALE trade show in Nuremberg in March, was a great success, and the new exhibition concept and design met with great acclaim among the paying public.elumatec’s new image also won over industry professionals, and praise poured in: “More dynamic, more modern, more clear, more positive and above all more confident – but still down-to-earth and not excessive”. What an accurate description that is – and that goes for the business as a whole too!

The Advantages of Using Band Saws 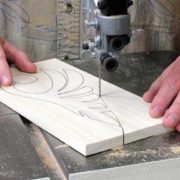 One of the most common issues with band saws are broken blades. They are usually caused when trying to cut curves. We think that it is important for every band saw user to know the proper way to cut complex curves. A while back we came across this amazing article, from industructables.com, that gives 6 tips on cutting out curves. 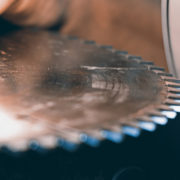 For many, buying used is the only way to acquire certain items. When you buy something tha 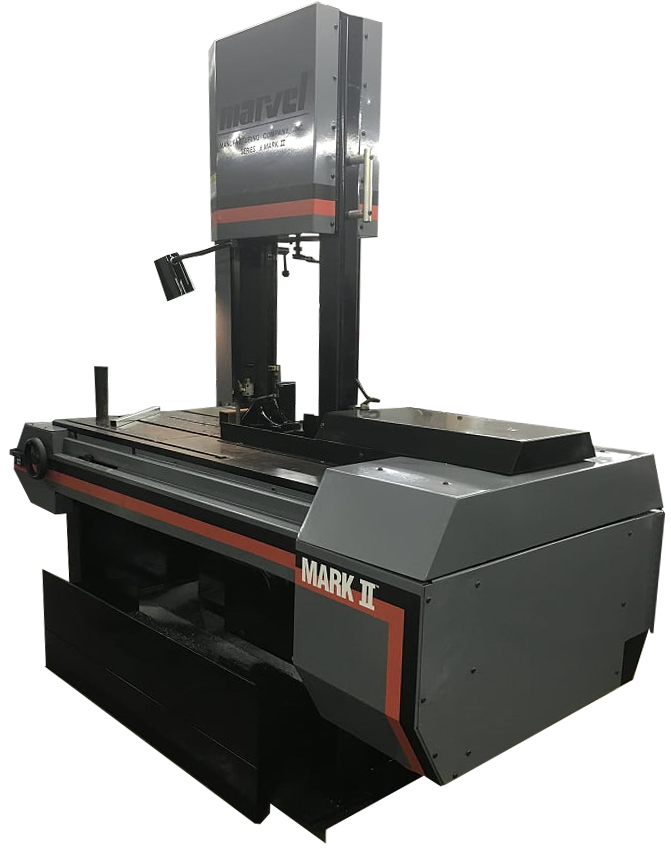 t has been used, it is sometimes even better than if you were to buy it new. However, when you buy anything used it is important to look it over to be sure it is up to your standards. Everyday we get emails asking us for advice on what to look for when buying used saws. We recently came across an article from Real World Survivor that gives you a list of “8 Things You Need to Consider Before Buying a Used Saw”:

Did this give you inspiration to start looking for used saws and other equipment?Check out our  “Used Band Saws” page!